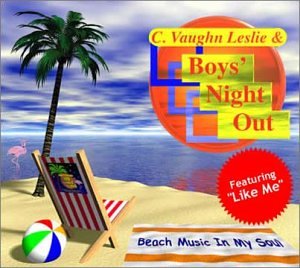 "Beach Music In My Soul", the new release from East Tennessee band "C. Vaughn Leslie amp; Boys' Night Out", features a selection of some of the greatest Soul, Rhythm amp; Blues, and Carolina Beach Music hits from the sixties, given a fresh treatment by BNO's seven-piece horn section. Included are hits from such artists as Otis Redding, The Temptations, Sam amp; Dave, and The Drifters, among others.

The album also features two original tunes. The title song, "Beach Music in My Soul", sets the theme for the CD. It was written by BNO's own keyboardist, Clint Eskew, and is quickly becoming a favorite among beach music fans everywhere. The second original tune, "Like Me", is a slow, love ballad written by Eddie Swann of Asheville, North Carolina and arranged by Clint Eskew. As one of our fans told us, "Like Me has something for everyone."

"p"BNO's primary motivation for performing is their love for the music, and it shows in this CD. If you're a fan of the Beach Music, Soul, and Ramp;B classics, you'll love "Beach Music In My Soul".

Start with a base of musical veterans, add a love of Soul and Beach Music, season with a sense of humor and a crowd-pleasing stage presence, and what do you have? Boys' Night Out, a group that has been consistently rated as one of East Tennessee's top bands. Wherever they play, Boys' Night Out gets people out of their seats and onto the dance floor.

Boys' Night Out was organized in 1983 with the goal of recreating the authentic performances of the Rhythm and Blues (Ramp;B) music that had been extremely popular with teenagers in the south during the late 1960s. Boys' Night Out's first public performance was in 1984, and they have played a busy schedule ever since.

When you first hear the Boys' Night Out sound, you realize that this is no ordinary band. A seven-piece horn section re-creates that vintage Ramp;B sound in a way that no synthesizer can. When you see BNO in person, it's obvious that they love the music they're playing. Sometimes it's hard to tell who's having more fun, the audience or the guys on the stage!

Over the years, Boys' Night Out has been invited to share the stage with numerous well-known professional acts. The band has provided musical backup for Ramp;B greats Percy Sledge (When a Man Loves a Woman), Archie Bell (Do the Tighten-Up), and Clifford Curry (She Shot a Hole in My Soul) and has opened shows for the Judds, Nell Carter, The Oak Ridge Boys, Jan and Dean, The Platters, The Impressions, Eddie Rabbitt, Marcia Ball, B. J. Thomas, The Chairmen of the Board, The Tams, and Lee Greenwood.

"p"If you are a fan of the Beach Music, Soul, and Ramp;B classics, you'll love Boys' Night Out -- The Best in Soul, Rhythm amp; Blues, and Carolina Beach Music!

Get the advice you need. Check the latest COVID-19 restrictions before you travel. Learn more

It’s not too late to get away, with deals on stays all through 2021

Save money when you book your flights and accommodation together

Connect with other travelers

Get inspiration for your next trip

We found seven of the best locations to go up, up, and away.

Five destinations for an unforgettable babymoon

Make the most of the temporary peace and quiet in these tranquil locations.

From chaotic racer slides to calming saunas, there’s something for everyone.

48 hours in Tokyo for every traveler

The perfect itinerary for a two-day trip around Tokyo – for every type of explorer.

8 ideas for an incredible solo trip

Make the most of me time by exploring a new city or just getting away from it all.

Booking.com is part of Booking Holdings Inc., the world leader in online travel and related services.

We have more than 70 million property reviews, all from real, verified guests.

How does it work?

If you booked through us and want to leave a review, please sign in first.